Posted on February 28, 2017 Categories: Newsletter, Social media No comments yet

by Brian Bonnell, IBFRA Secretary (Canadian Forest Service)
As a scientist, should you spend some of your valuable time tweeting, on Facebook or blogging about your work? What value is social media to a researcher? Some argue against it while others say you absolutely must have an online presence. Has publish or perish turned into Tweet or perish?  I believe that social media is a great tool and can do a lot of things. I also believe it may not be for everyone. Depending on your objectives for sharing your work, collaborating and finding out about the latest research advances, it could be a very valuable tool.

Christie Wilcox, writing in Scientific American, has this to say: “Scientists. We’re an enigmatic group of people. On the one hand, we are trailblazers. We’re the innovators and inventors whose job it is, quite literally, to expand the world’s technology through knowledge…Yet when it comes to social adaptation and technology, we’re more than behind the curve…It may seem of little consequence whether scientists are using social media. That certainly seems to be the attitude of many scientists – social media platforms like Facebook are seen as little more than ways to tell everyone how good the omelette you just made was…But social media platforms aren’t just digital water coolers. They are the way the world is networking and communicating. They are how and where we share information – with friends, colleagues, acquaintances and any and everyone else.” 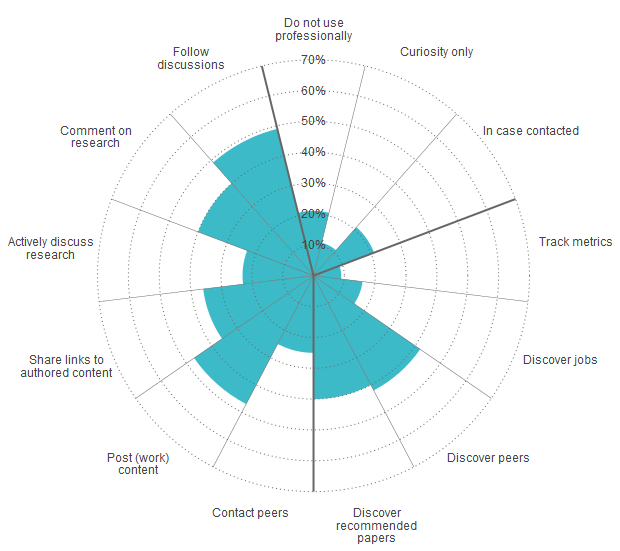 A 2014 Nature survey explored why scientists use social media with following discussions, posting work content, discovering peers, and discovering recommended papers being the main reasons. In an American Scientist blog post on The Benefits of Twitter for Scientists, David Shiffman, a marine conservation biologist and award-winning science communicator, writes, “my own research (and years of personal experience) has shown that if properly used, Twitter makes it possible for scholars to follow along with cutting-edge research in their discipline as it is presented at conferences on the other side of the world, to directly share their expertise with policy makers and journalists, and to get feedback from expert peers as they work on their own research projects.”

Social media is simply communications online. However, the main difference between social media and traditional media such as publications is the “social” part. It is the interaction with others that make social media different from earlier forms of communications and knowledge transfer. At the same time, it is not a replacement for direct, face-to-face interaction. Dr. Sarah Boon dispels five key myths that seem to come up in most discussions of scientists using Twitter in her 2014 blog post for the Canadian Science Publishing website.

What usually makes it daunting to the beginner is the sheer number of types of social media and the many different platforms for each type adding complexity and often confusion as to what platforms to use and how. When I started a couple of years ago, I know I felt overwhelmed and, at times, still do. At the same time, it has also opened a word of knowledge and connections that would have been difficult for me to obtain or make without social media. To simplify, there are six main uses – publishing, sharing, messaging, discussing, collaborating and networking – and three main players – Twitter, Facebook and Google. Beyond that, the myriad of things you hear are just services, the most popular of which are owned by the big three.

“Honestly, it isn’t easy at first – but it gets easier with practice. If you’re new to social media, start off as a spectator following people with common interests. Then, ease into sharing links to stories, papers and other things that fascinate you. Finally, start creating original content. This takes time, but once you see the results you’ll be glad you did it.” (Kirk Englehardt, Vice Chancellor for Marketing and Communication at University of Tennessee at Chattanooga, 2015)

Want to know more or get started in social media? Check out the resources below and stay tuned for the next IBFRA newsletter when part 2 will explore how to get started with social media as a scientist.

What’s your research story? Message from the IBFRA President