The boreal forest (or “taiga”) is the world’s largest land biome. The boreal ecozone principally spans 8 countries: Canada, China, Finland, Japan, Norway, Russia, Sweden and the United States. It is typically comprised of coniferous tree species such as pine, spruce and fir with some broadleaf species such as poplar and birch.

The circumboreal belt of forest represents about 30% of the global forest area, contains more surface freshwater than any other biome, and has large tracts of unmanaged forests across the high-latitude regions of Canada, Russia, and the United States. From a biological perspective, boreal forests are defined as forests growing in high-latitude environments where freezing temperatures occur for 6 to 8 months and in which trees are capable of reaching a minimum height of 5 m and a canopy cover of 10%. 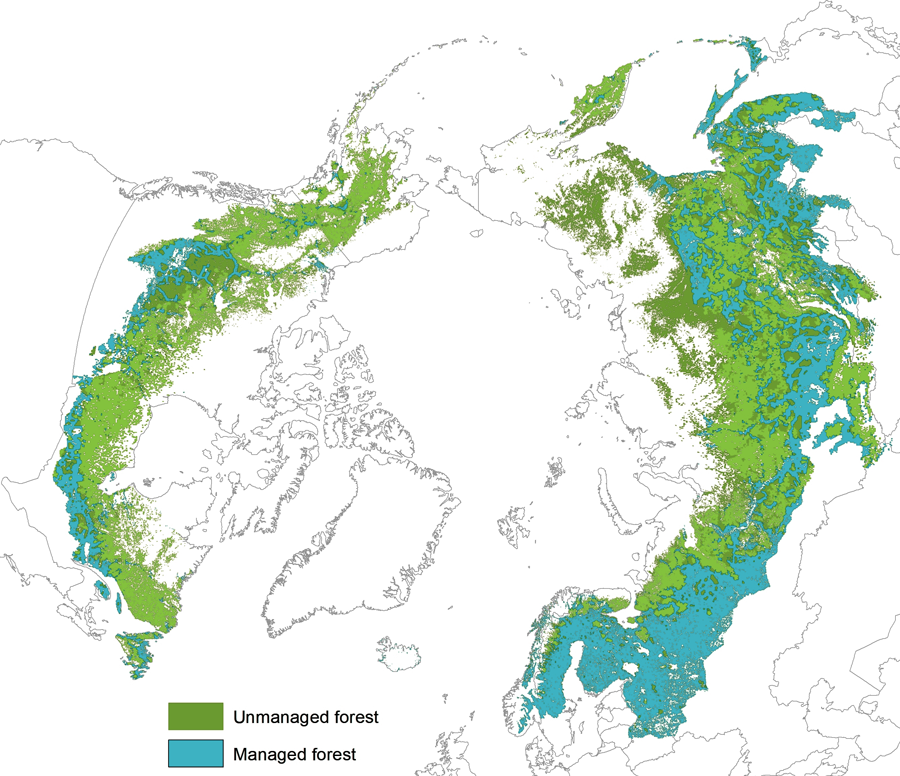 Boreal forest ecosystems have evolved under the constraints imposed by a short growing season and severe winters during which snow cover may last for several months. About one-third of their extent is underlain by permafrost. As noted above, most boreal landscapes are characterized by a low diversity of tree species, of which gymnosperms such as Abies, Larix, Pinus, and Picea species usually dominate, with varying proportions of angiosperm Populus, Betula, and Alnus species.  This low tree diversity belies the thousands of species of living organisms that thrive within boreal stands.

Boreal forests also provide critical services to local, regional, and global populations. Communities, including those of Indigenous people, benefit from ecosystem services provided by the forest for fishing, hunting, gathering, leisure, spiritual activities, medicines, and economic opportunities. In addition, more than 33% of lumber and 25% of paper on the export market originate from boreal regions. Globally, boreal forests help regulate climate through the exchange of energy and water. They are also a large reservoir of biogenic carbon on a level comparable to, if not greater than, that of tropical forests.

During its relatively brief history since deglaciation, the boreal forest has experienced many fluctuations of its climatic environment. The current warming trend experienced by northern latitudes is, however, unprecedented in its speed and projected amplitude, and is also more pronounced than in the rest of the world. Resulting impacts are numerous and include the melting of permafrost, changes in tree growth rates, increased incidences of wildland fire, and changes in the dynamics of insect outbreaks. The causal links among these changes and their implications for the functioning of the boreal forest and the services it provides to local and global populations are not yet completely understood.